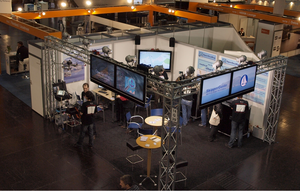 On nine days we presented OpenSeaMap to a wide professional public.

People were intrested in how they could contribute to the map and how the map could help them with voyage-planning or navigation. We were 8 hosts on the stall and with that hardly enough to handle all requests. Yet it was big fun explaining the free map!

Knowlege on OpenSeaMap begins to spread. The Netherlands, Finland and Portugal... we even had conversations with businessmen from the Gulf of Persia in the subway! On the beginning we were visited by the BSH (German Hydrographic Service), almost daily we had the press coming, even television came twice.

On 2 stages we held 11 presentations pointing out the benefits of OpenSeaMap and OpenStreetMap. An eyemark was given to the Crisis in Haiti and how OpenStreetMap.org helped with maps "Mapping the crisis in Haiti" (Video). We were on the stage with the German TV-cook Harald Mertens, talking about cartography while preparing a sailor's fish-menue. It's great being supported this way!

Many heard for the first time of OpenStreetMap and were amazed by the various possibilities it offers: streetmap, hiking, cycling, public transport, even for skiing it can be helpful. Some though were active mappers, some even had OSM on their iPhone.

We demonstrated how to map, visitors added their homeport to the port-handbook. We planed coorperations and made plans for the future. And we showed how to use OpenSeaMap offline on Board or how to install it to a GPS-receiver. OpenSeaMap works perfectly on Garmin, Lowrance and SeaClear.